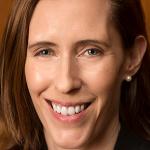 Oona A. Hathaway is the Gerard C. and Bernice Latrobe Smith Professor of International Law at Yale Law School, Professor of International Law and Area Studies at the Yale University MacMillan Center, Professor of the Yale University Department of Political Science, and Director of the Yale Law School Center for Global Legal Challenges. She is also Counselor to the Dean at Yale Law School. She has been a member of the Advisory Committee on International Law for the Legal Adviser at the United States Department of State since 2005. In 2014–15, she took leave to serve as Special Counsel to the General Counsel at the U.S. Department of Defense, where she was awarded the Office of the Secretary of Defense Award for Excellence. She is the Director of the annual Yale Cyber Leadership Forum and a member of the Council on Foreign Relations. She has published more than forty law review articles, and The Internationalists: How a Radical Plan to Outlaw War Remade the World (with Scott Shapiro, 2017).