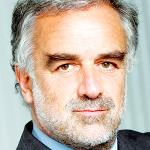 Luis Moreno-Ocampo was the Founder Chief Prosecutor of the new and permanent International Criminal Court (2003-12). He had to establish the Office of the Prosecutor from scratch and to investigate massive crimes committed worldwide, including Genocide in Darfur, and crimes against humanity committed by national leaders like Muammar Gaddafi and President Laurent Gbagbo in Cote d’Ivoire, and militia commanders as Joseph Kony.

He is finishing a book on his tenure: “War and justice in the 21st Century” to be published by Oxford University Press.

He is currently exploring at USC School of Cinematic Arts the relations between justice and popular narratives following Viet Thanh Nguyen’s concept that “all wars are fought twice, the first time on the battlefield, the second time in memory.”

He had a critical role at the national level during the transition to Democracy in Argentina. He was Deputy Prosecutor in the trial against the “Military Junta” (1985). The prosecutor in military rebellion cases in 1988 and 1991 and dozens of grand corruption cases, including charges against judges and Ministers. During the nineties, he was in private practice in Argentina, helping companies and public institutions control corruption. In 1998 he directed a famous Argentine TV show teaching law and conflict resolution.

After the end of his tenure as the ICC’s Prosecutor, he was the Chairman of the World Bank’s External Panel of Experts on Corruption allegations in Bangladesh (October 2012—May 2013). He is part-time in private practice managing cases with transnational challenges.