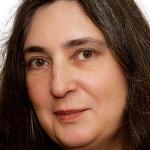 Olga Werby, Ed.D., has a Doctorate from U.C. Berkeley with a focus on designing online learning experiences. She has an M.A. degree from U.C. Berkeley in the Education of Math, Science, and Technology and a B.A. degree in Mathematics and Astrophysics from Columbia University. She’s the president of Pipsqueak Productions, a successful boutique web design and digital production firm, which she founded with her husband Christopher in 1994. She has been creating computer-based projects since 1981 with organizations such as NASA (where she worked on the Pioneer Venus project), Addison-Wesley, and the Princeton Review. She conceived, designed, and illustrated the award-winning “Field Trips” series of programs distributed by Sunburst Communications.

Olga teaches interaction design and cognitive theory at the U.C. Berkeley Extension Program, and has taught at the American University in Paris, San Francisco State University’s Multimedia Studies Program, the Bay Area Video Coalition, and the campus of Apple Computers. Olga is a member of the Association for the Advancement of Computing in Education. She also holds a California teaching credential and is part of the San Francisco Unified School District where she often tests science-related curriculum materials in public elementary and middle schools.