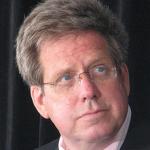 Mr. William R. Pace has served as the Convenor of the Coalition for an International Criminal Court since its founding in 1995. He is the Executive Director of the World Federalist Movement-Institute for Global Policy (WFM-IGP) and is a co-founder and steering committee member of the International Coalition for the Responsibility to Protect. He has been engaged in international justice, rule of law, environmental law, and human rights for the past 30 years. He previously served as the Secretary-General of the Hague Appeal for Peace, the Director of the Center for the Development of International Law, and the Director of Section Relations of the Concerts for Human Rights Foundation at Amnesty International, among other positions. He is the President of the Board of the Center for United Nations Reform Education and an Advisory Board member of the One Earth Foundation, as well as the co-founder of the NGO Steering Committee for the United Nations Commission on Sustainable Development and the NGO Working Group on the United Nations Security Council. He is the recipient of the William J. Butler Human Rights Medal from the Urban Morgan Institute for Human Rights and currently serves as an Ashoka Foundation Fellow. Mr. Pace has authored numerous articles and reports on international justice, international affairs and UN issues, multilateral treaty processes, and civil society participation in international decision-making.