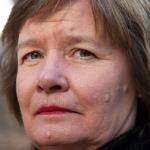 Her op-eds have appeared in the New York Times, International Herald Tribune, and the Washington Post. She has testified before the U.S. Senate Committee on the Judiciary and she has appeared on CNN, BBC, and NPR, among others. She serves on the executive board of the American Branch of the International Law Association, the International Judicial Academy, and International Criminal Law Services.